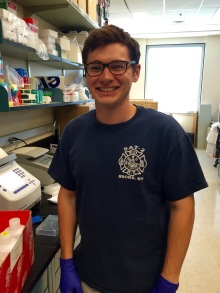 Ryan Mulqueen graduated from SUNY Stony Brook University in 2014 with a B.S. in Interdisciplinary Biology. While in his undergraduate studies, he had varied research interest. He began his research career studying the formation of social hierarchies in African cichlids in the lab of Ivan Chase, Ph.D., where he helped develop the system to codify behaviors of dominance. He then moved on to study the speciation of native drosophilids under the instruction of Walter Eanes, Ph.D. This work became the focus of his undergraduate thesis, in which he analyzed the morphology of drosophila sex-combs intraspecifically, interspecifically, and in previously undocumented interspecies hybridizations. Ryan joined OHSU’s graduate program in Molecular and Cellular Biosciences in the fall of 2014. In the spring of 2015, Ryan became a member of the labs of both Brian O’Roak, Ph.D. and Andrew Adey, Ph.D., under a joint-mentorship program. Ryan is interested in studying the roles of somatic mosaicism and epigenetic factors in the developing brain. To this end, Ryan’s ongoing work involves the improvement of high-throughput single-cell epigenetic protocols and enhanced neuronal population targeting in transgenic lines.